A common problem for many dog owners is separation anxiety.  This is when a dog whines or barks almost incessantly, or gets into mischief while the human/s are away.  This behavior sometimes doesn’t show itself until adolescence.

It is easier to prevent this problem than to fix it but it can usually be fixed as well, with some time and energy on your part.  Begin prevention even with young puppies. 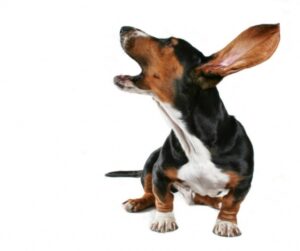 First, put the puppy in a room where he cannot get into too much trouble.  This will need to be done after he/she has had sufficient time to urinate/defecate outside.  They tell the dog goodbye – in a low-key manner – and make the usual preparations to leave, such as putting on a jacket, getting your car keys, and even go through the motions of locking the door.  While all this is going on, ignore the puppy.  Even if he whines or barks, ignore him.

Second, go outside for a minute or two and then return inside.  Wait to greet the puppy until after you have done your routine from returning home, such as laying down your keys on the counter, and hanging up your jacket.

Third, greet the puppy in happy but subdued manner.  Too many dog owners make the mistake of gloating all over the puppy with a high manner of exuberance, which stokes the puppy’s emotions for the next time you return home.  Again, greet him calmly yet happily.

Last, gradually lengthen the times in which you prepare to leave, the time in which you are away from your puppy, as well as the length of time in actually greeting the pup.

The cure for separation anxiety is the same as the prevention except that the cure will typically take far more work than preventing it in the first place.

While you’re gone, it is always a good idea to give the puppy something to occupy his mind.  Toys (one hard toy –such as nylabone, and a soft toy – such as rope tug), a stuffed Kong, and the like are good items to use.  If you’re crating him, give him some treats to condition him that a crate is good thing – not a prison.  And again, go through these motions calmly without a lot of fanfare.  There will be other times for exuberance and celebration throughout the lifetime of your furry friend.