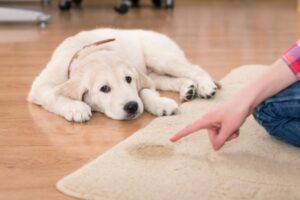 The subject seems like such a daunting task! The truth is, if you will devote some time and effort, and be consistent, your puppy’s elimination problems may be an easier fix than you expect. Start the process as soon as your new puppy moves in. Consistency now will reap great dividends down the road. And remember, most pups are not reliably house-trained until they are at least 4-5 months old.

Close observation is essential to house training puppies. The pup needs almost constant supervision. We recommend crate training to help alleviate some of this constancy. The puppy will generally tell you when he has “to go.” It would be nice if he could just blurt it out: “I have to go to the bathroom.” Instead, he will cue you in through his actions.

There are behaviors to watch for in a puppy that will tell you he has to go. Sniffing, whining, wandering in circles, and of course squatting are indications that you need to grab the leash and take him out! If these signs are shown and you do nothing about it, the mess is your fault, not his. It will be helpful to note that there are particular times the pup will need to go outside; especially after eating, drinking, playing or sleeping.

Always bear in mind that puppies have very little control over their elimination. When they feel the urge “to go” they need to go NOW. Don’t wait until a commercial on TV or whatever is convenient for you… or you’ll soon have the inconvenience of cleaning up a mess.

Scolding a puppy for eliminating in the house is not advisable. It’s already after the fact. You’ve missed the opportunity for education. Scolding will only make matters worse. Clean up the mess, bite your lip, and be sure to watch better next time.

Take the pup outside and wait. Don’t go back inside until he has eliminated. If you do, you’ll soon wish you hadn’t. If it is absolutely essential that you return inside, place the pup in a crate or other safe place where an accident won’t be such a big deal. After 10-15 minutes, take him out again. Again, just wait. Take them outside to the same area to do their business. Puppies will smell previous “accomplishments” and know why you took them outside this time.

Always praise them when they eliminate. Even a treat is in order. It makes this trip outside a pleasant and positive experience. If the puppy equates going outside to the bathroom with being yelled at or corrected, he will soon develop the idea of soiling inside just to avoid the correction. Praise and treats go a lot farther in accomplishing your house-training goal. If possible, allow the pup to play around for a while before you go back inside. Some pups who don’t get this privilege will learn to postpone potty time as long as possible in order to get more play time outdoors.

Use a schedule to help your pup learn his house-training lessons. Let him out on fair schedule consistent with his age and your ability. It would be a good idea to have trusted neighbor or friend let him out during the day if you are away at work. As he grows, he will soon learn to “hold it” until you let him go outside. Letting the dog out every time he whines will create a monster for you. A spoiled puppy now is the equivalent to spoiled carpets later. Letting him out too often will condition him to avoid self control. In other words, if you let the pup out every hour the pup will be conditioned to pee every hour. A regular schedule will also tend to give his bowel movements some regularity. As he and his kidneys grow, increase the timespan between your trips outside. Two hours between trips is reasonable for most 10 week old puppies. Some less, some more. The thing to remember is, again, use a schedule…but be fair.

A word about crate training and house training: a crate is a great asset in maintaining a schedule. We have found it to be a very effective method. When you let the pup out of his crate, immediately take him outside to do his business. Then you can feed and water him, play with him, let him out again and put him back into the crate. He is not to be let out until the next stop on your schedule. Yes, that’s difficult when you first get a new puppy! As he and his regularity grow, you can gradually increase the time he is out of the crate. But don’t cheat…you won’t be doing yourself or the puppy any favors – even though his whining may try to convince you otherwise. (For more information on crate training see our article on that subject)

Observation and consistency are the keys! Do these and your pup will soon be well on his way towards “house-trained” status!