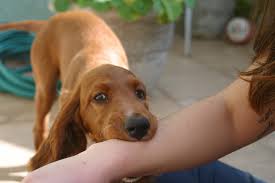 Teaching a pet puppy not to bite is an important part of training (there are differences in training a puppy destined to become a protection dog or police K9). Puppy training should begin now.  Sometimes it seems cute when you first get a little four-legged bundle of energy. But it’s not so cute as he grows into a 50 lb. bundle of energy. Pant legs, skirts, and coats are all fair play in the pup’s mind.

It needs to be understood that mouthing and chewing is natural for pups. When with their mother and litter-mates, they mouth and chew on about anything they can get their muzzles on: each other, mother, toys, food/water pans. Some breeds, especially retrievers, innately want to mouth something nearly non-stop. It’s a natural and good way for pups to explore their world and learn many things – including what is acceptable to chew on and what is not.

This is where training comes into play. Bite inhibition teaches the pup that biting actually hurts someone. He learns that mouthing a chew toy is acceptable; chewing an arm is not. Chewing a Kong or bone is great; chewing the furniture is not. A treat is fine to eat; an electrical cord is not. It takes some time and effort on your part but eventually the puppy learns what is satisfactory and what is objectionable.

A pup’s teeth are very sharp. Sometimes it even feels like they’re intentionally trying to inflict pain but nearly all the time they are merely playing. But playing can hurt too, so it’s time to teach the pup that human skin is tender.

When your pup bites, chews or mouths on your anatomy, it’s best to speak his language and let him know that the biting/chewing is not acceptable. As he is beginning his bite, let out a high-pitched yelp or “ouch.” Immediately turn your back on the pup and maybe even leave the room. After a short period of time (a minute or two) return to the pup and begin playing again. If he bites or chews again, repeat the procedure. Repeat it until you can return to play without the pup nipping you. This process is how his mother and litter-mates taught him that biting too hard ends the play session: “if you want to play, you must learn to treat my skin with respect or I’m leaving and our play time is over.” You’re speaking a language he understands.

Another helpful practice is to remove your arm/fingers from his mouth and place a chew toy there instead. You may need a combination of this and the above procedure. This practice teaches a pup some self-control.

If the “yelp method” doesn’t work you can try another. When the pup nips you, say “NO!” in a stern voice, grasp the puppy’s muzzle and lookly sternly at the puppy. Don’t squeeze him, hit him or shake him. Just take control of the muzzle. Then release it and leave the room. Again, you’re speaking a language the pup will understand. He was corrected many times this way by his mother before you acquired him. It needs to be repeated: ONLY use this method when the “yelp method” doesn’t work, which it usually does.

As the pup gets the idea, but looks like he may be nearing another nip, you can begin to use the words “gentle” or “easy.” He will eventually learn to be careful when playing with a human.  And your puppy training skills have succeeded 🙂