Sometimes people need to be reminded that dogs are NOT robots.  Dogs are living, moving, breathing, active and reactive beings.  Humans cannot merely “push a button” and expect the dog to “perform.”  There is much more involved in dog training.

As a living, thinking individual, a dog must be motivated, encouraged, instructed, and conditioned to respond in a positive manner.  Effective trainers find 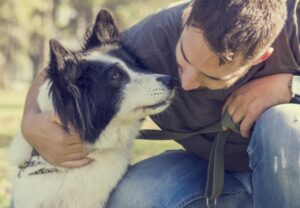 out what motivates a dog and then use that motivation to encourage a dog in his/her training.  Furthermore, this moving, breathing, reacting, living being must be rewarded frequently in order to maintain the training he has received.

It works much like humans in the workforce.  We get out of bed when we’d rather not, drive through traffic that we’d rather not, face a boss who isn’t top-notch, endure co-workers who are a pain, all in order to receive a paycheck each pay period.  That’s our reward.  None of us would continue working if there were no paycheck.  So it is for the dog.

The dog’s paycheck may be a treat, a toy, a scratch behind the ears, or an enthusiastic “good dog” from his human.  Thankfully, dogs aren’t demanding $20 an hour 🙂

When a dog quits heeling correctly, or loses enthusiasm in detecting contraband odor, or fails to perform as it once did, the underlying problem is usually lack of effective motivation.  In practical terms, this means that the human side has failed.  The owner’s voice lacks enthusiasm so why should the dog be enthused?  The dog is repeatedly told to do something it would rather not do and receives nothing in the way of what the dog thinks is a reward for cooperating.  Why keep it up?

Think of it this way….   Your dog took off after a squirrel in the yard, you called him back, he came, and you just walked off?!  Helloooooo!  The dog just overpowered his strongest natural urges just to respond to your recall.  You’d better reward his victory – or you’ll soon end up with a defeat.  You’d better pet him up, stuff him with treats, praise him to no end, play with his favorite toy, and make him feel like it was worth it to answer your recall!  That living, breathing, reacting being will respond with even more vigor on the next recall – because he knows he will receive a paycheck.

A robot would respond to a recall – even if it was immediately put into a crate every time thereafter.  But a living, thinking individual is going to catch on and say to himself, “Every time they call me, they slap me into the crate and the game’s over.  But if I ignore their begging, I can play as long as I want.”  The dog’s reward is doing what is valuable to him.   On the other side, if every time the dog is recalled he receives a hearty “good dog” and treat (or some other item the dog deems valuable), he is motivated to come when called.  If every time she is crated there is a delicious morsel waiting inside, she will be motivated to enter the crate when asked.

Across the years of our training experience, we’ve run across some dog owners who think that they just need to push the dog’s “Obedience button” and the dog will perform as desired.  The truth is, the dog will need to be continually reinforced throughout his lifetime.  He needs to be continually reminded that there is a benefit for him to obey his handler.  There are a few dogs who may work with no paycheck but most will need frequent reinforcement.

Dogs who respond well in many circumstances have had good training and that training maintained and reinforced at home.