In our years of dog training experience, we’ve heard a lot of questions and comments about training and dogs in general. 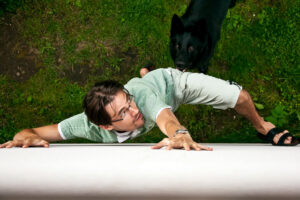 Some of it is outright laughable and at other times it can be frustrating.  Here are a few.

“My protection dog needs to be black/red.”  Yes, admittedly, there are color preferences among dog owners and we’re not knocking that.  What we are clouting……. is when people make color the most important thing.  If you want a real protection dog, then protection should be your focus.  You’ll be more interested in the dog’s ability than in his color.  An intruder is not going to think, “Well, I can’t break into this house; there’s a black/red dog in there.”  Nope.  But he will think, “There’s an 80-pound German Shepherd in there that knows I’m here and he’s barking like he’s going to eat me alive!  Next house, please.”  In the moment of an intrusion or attack on your person, the only thing that matters is your dog’s ability to neutralize that threat.

“My protection dog needs to be registered.”  Imagine this scenario….  It’s 11pm.  As you’re turning out the last light before bedding down, you hear a noise outside.  Soon thereafter you hear a low, thudding/scraping noise like someone is trying to pry open a door or window.  So you call your Belgian Malinois to the rescue.  He goes over his doggie bed, rearranges a few things, and emerges with something in his mouth.  You’re wondering what he has.  But at that moment, the intruder bursts through the back door!  He is met by your Mal, who spits out something at the intruder’s feet.  The shocked intruder reaches down to pick up the item, looks it over, and then says, “Aw nuts!  This dog is registered!  We can’t hit this house.”   Then he promptly excuses himself, exits through the door, and he’s never seen again.  Well, this scenario has NEVER happened before.  Bad guys don’t care about registration, all they fear is the dog’s ability to defend.  We’re not knocking registration – we’re just saying there is much more to a protection dog than registration.  In fact, due to poor breeding practices by the uniformed or money-hungry, many trainers of protection dogs will not even use registered dogs.  They’ve learned that registration tends to weaken bloodlines and destroy drive instead of strengthening it.

“I want my protection dog to be able to bite the bad guy and then be petted by the bad guy when I tell him to.”  Those who tout this opinion say that it proves a dog is very obedient.  But that’s seldom the case.  This type of dog owner reflects a lack of understanding upon reality.  He lives in a dreamy world and has probably seen too many competition videos online.  Furthermore, this type of dog reflects very poor training.  The dog has never been taught the seriousness of the situation.  Many times these dogs – while being bragged upon for the balance and social skills – will not defend in a real-life attack because they have not been trained that an attack is a bad deal.  Their training has not been lifted above the fun and fancy.  It’s all a game.  However, in real life an attack is not a game.  It’s stressful.  It’s ugly.  It’s a fight for life, and health, and family.  Successful training will produce a dog that will not permit the bad guy near himself (other than the pursuit on the bad guy) or his family.  The bad guy is a threat, an enemy, should be subdued, and not permitted the same privileges as the family.

If you’ve been a victim of these comments in the past, it’s time to wise up.  There are several articles in our Blog section that will give you a more realistic grasp of what is required for protection dog training.