Your number is called on the radio for backup at the city park.  Upon arrival you meet with a fellow officer and discuss his suspicions. You find a suspect seated with his head in arms on a picnic table.  You notice a bottle of whiskey open and laying on its side, with the contents gone.  The person’s outward appearance vaguely meets the description that came over the radio earlier on your shift of an armed suspect fleeing a gas station, except this man doesn’t have the heavy brown coat.  Faded jeans, check.  Black cap, check.  Brown boots, check.  It’s highly likely this is your suspect.

Your fellow officer initiates contact with the suspect.  “Hello sir.  I’m from the XYZ PD.  Lemme see your hands.”  The suspect shakily raises his head and tries to focus.  “Oh shucks!”  He plops his head back down and ignores you both.  He is told again to show his hands, with no response.  The initiating officer nods in your direction.  As you head back to your K9 vehicle, you hear the other officer state, “This is XYZ Police Department.  Show me your hands.  Show me your hands or we will send a K9 and you will be bit.”  No movement; no response.  The warning is repeated.  No response.

The initiating officer nods again in your direction.  You release the K9 with a command to apprehend the suspect.  The dog runs at the suspect, bites his outside right shoulder, dragging him to the ground.  As the suspect is being flung to the ground, you see a steel gray glint of metal.  A loaded weapon falls to ground.  The cover officer takes the weapon.  The suspect is now on the ground, screaming obscenities at the dog.  You and your partners (human and canine) take the suspect into custody. 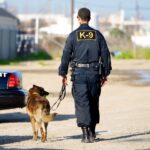 Now, back to the loaded weapon.  A passive person is just as capable of killing officers as an aggressive one.  It’s a good thing you work with a trainer who can foresee these situations and train for them.  You see, for some K9 units, apprehending a passive suspect is unheard of.  The K9 runs towards the suspect and waits for him/her to act in an aggressive manner before engaging.  This is lack of proper training.

An aggressive bite is where training begins.  But training should exceed this stage!  Training for passive bites is a necessity for law enforcement K9s.  It would be easy for the suspect above to sit with his head in his arms, pointing a loaded weapon, and ready to discharge it.

To prepare for realistic street engagements, police K9 training should include hidden sleeves and passive bites, among other things.  It is far better to prepare for the situation in this article than having to re-play the scenario over and over in your mind after an officer is shot.  Realistic training produces realistic deployments.

By the way (you knew this was coming, right) Conifer Canine can help your department prepare for real-life situations.  We train real.  We train hard.  We train often.  So should you.  Contact us for training opportunities.