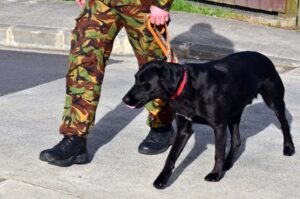 There are many war veterans who are, unfortunately, dealing with post-traumatic stress disorder as a result of their service to the country. PTSD is a very serious mental health issue that can make it extremely difficult for those who suffer from it. They can have trouble going about their everyday lives, and in worst-case scenarios, it can make it nearly impossible for them to function on the most basic of levels.

There may be some good news coming their way, though, as a new study seems to suggest a new way to treat PTSD.

While it would not necessarily eliminate the effects of PTSD altogether, the study—which was conducted by researchers at the Purdue University College of Veterinary Medicine—showed that those suffering with PTSD experienced fewer symptoms of the disorder when they lived life with a service dog by their side. The study was conducted in conjunction with the Human Animal Bond Research Institute and Bayer Animal Health and could be a great sign for all of those looking for an answer to PTSD.

There is still a lot of research to be done on this particular topic, and the researchers who did the study have been quick to point out that their findings do not suggest people with PTSD should stop seeking normal treatment for the disorder. However, the study showed a definite connection between service dogs and PTSD and could be used to conduct further studies on the issue. So one day, service dogs could be used more extensively by those with PTSD.

Dog Trainer College is encouraged by this latest study about service dogs and PTSD and is looking forward to seeing where it leads. In the meantime, we offer training to those interested in becoming dog trainers themselves. This exciting field is expanding and could help bring about some real change both for those with PTSD and those with other service dog needs in the years to come. Call us at 812-650-2394 today to hear about the courses we offer at this time.