One of the reasons why some breeds (such as pitbulls) or some dogs with trained skills (such as a personal protection dog) are given a bad rap is because of owners who do not use their God-given intellect or who flourish on impressing others.

A personal protection dog is a great asset and tool.  However it is not a toy.  The dog should never be suded to impress your friends with his/her skills or to “show off.”  The dog has been trained to take commands seriously.  He/she has been taught that your health and safety, as well as his own, depend upon him faithfully fulfilling his duty.  It would be very unwise to allow your dog to rough-house or play with a friend who thinks it would be “cool” to catch a bite from your dog.  Don’t use your protector as a game.  You risk injury, reducing your tool to a toy, and ruining a friendship.  It just isn’t worth it.

Also, protection work is very intense.  Your dog’s training should have been completed by a certified professional who has invested hours of training for himself and many hours in working with your dog.  Horseplay on your part could result in serious injury.  The average German Shepherd has 1200 psi on his bite.  Now, if his services are needed for protection or police work, don’t be concerned about the psi.  Let the dog do his work.  But to allow this kind of tool access to body parts simply to play or impress friends is utter foolishness.

Another word to the wise is to be careful in situations where family/friends are chasing or rough-housing one another.  You may see it as a fun 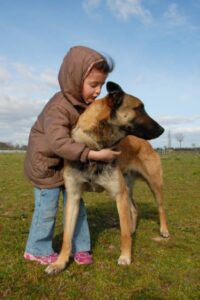 game; your dog may see it as an attack.  A child chasing another child may look like an assault in the dog’s eyes, especially if screaming is interjecting into the play, as running kids sometimes do.  Siblings, relatives, or neighborhood children (not limited to children) playfully wrestling can be viewed by the dog as an attempt of personal injury upon his humans.  Crate him in another room first – before the football game is played in the backyard or the game of tag is begun.  Think through your dog’s eyes:  in your dog’s training his handler was chased, snatched, yelled at, tackled, etc.  Some innocent games look very similar to your dog’s protection training.

If you have started with the right dog in the first place, with the temperaments needed to be a social yet protecting partner, the chances of unintended injury are slim.  There is no need to walk on pins and needles.  But, as a personal protection dog owner, it is wise to be aware of how the dog thinks and how he sees things through his eyes in your world.