CLICK HERE
Should you spay or neuter your dog?  This is a common concern we hear from our clients. That’s usually a good sign of responsible dog ownership so we’ve constructed this article to help.
First off, spaying and neutering is a surgical procedure that removes (or least restricts) the dog’s reproductive organs and therefore prohibits the breeding of offspring.
If you are not planning on breeding your dog, the safest advice is to get your dog altered (spay or neuter). [Please put some very serious research into the decision to breed and, if you choose to breed, be sure only high quality animals are involved.] The biggest advantage in spaying/neutering is obviously to reduce the pet overpopulation problem seen in many streets and humane societies across the country. In our opinion, lobbyists who give an across-the-board mandate that all dogs/cats should be altered are usually thinking of their own wallet. Face it… the spaying/neutering of pets is the foundational income of many veterinary facilities. BUT (to keep the subject balanced) there are still numerous benefits to consider in getting the surgical procedure done.
It may be helpful to recognize that this subject is currently under hot debate in many veterinary circles. New research has suggested that some 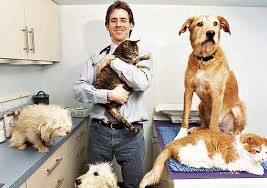 changes in the way we think about the subject are in order. However change comes slowly, so many standard guidelines that people/vets have been comfortable with for years still persist in the face of contemporary research. We found many varied opinions on the subject while conducting research before posting this article. Some “experts” even go so far as to intimate that unaltered dogs (especially males) turn into child-killers and that unmanageable dogs magically mellow into heroic specimens. These baseless opinions were obviously written by someone using scare tactics and that want to have a hand in your wallet.
Now for the facts….
There are different time frames that many vets use in recommending spaying/neutering. One answer won’t satisfy them all. However we’ll try to give some GENERAL guidelines. The most common recommendation is to get the procedure done before the animal reaches sexual maturity, usually before the first heat in females. Some say as early as eight weeks of age. The standard answer is six months of age. Three can be advantages in waiting a few extra months, even until the pup is twelve months old. Discuss this with your vet as this is one of the points of contention in new research. However if you do wait, be sure your dog isn’t adding to pet overpopulation during the wait.  Recent studies (UC Davis 2016, for example) have shown that delaying altering your large dog until he/she is 12 months old will help reduce the chances of your dog developing hip dysplasia in the future.
Are there benefits when you spay or neuter your dog? Yes. A female that is spayed before her first heat has almost a zero percent chance of getting mammary gland cancer or pyoderma ( a skin disease). The risk increases slowly as the unaltered female matures. Spaying also prevents a common, life-threatening infection of the uterus called pyometra. Neutering helps to prevent some cancers of the testicle and anus and some prostate problems. Alteration does prevent a number of life-threatening diseases. On average, altered dogs live one and one half years longer than intact dogs do. Additionally, many counties across the US give a reduced fee for a dog license or at no charge for the owners of altered dogs.
Are there risks in spaying/neutering? Yes again. Any surgery carries a certain amount of risk. A younger dog’s immune system is not fully developed and may be a concern if post-surgical infections occur. Additionally, new studies show that males neutered at six months of age have an increased risk of cruciate ligament disease (leading to lifetime lameness if corrective surgery is not done) and osteosarcoma (a bone cancer). While no one knows for sure why, neutered males have a higher incidence of prostatic cancer than unneutered males. Spayed females have an increased risk of urinary incontinence; the earlier the spay, the more likely the condition. Those who have a puppy/dog to be used in personal protection work or Police K9 may see a reduction in some of the drives necessary for these tasks, so think twice before altering these type of dogs.
Another question we hear is, “Will altering my dog change his/her temperament and/or behavior?” To be honest, a can of worms has just been opened! The answer is…yes…and no. Huh?! In other words, if your dog is a brat before surgery, he’ll be a brat after surgery. Some seem to suggest that altering is a magical cure for nearly anything canine. Nonsense. Neutering is not a cure for marking or humping, behaviors which females engage in sometimes as well. Neutering usually reduces marking/humping but typically does not eliminate it. Altering will greatly reduce your dog’s desire to roam – i.e, males pursuing females in heat or females in heat seeking a male. Altering does not greatly change most forms of aggression; again, it may reduce some forms of aggression but usually does not eliminate the aggression. The exception here is inter-male aggression, where there is a 60% success rate (it’s best to neuter the least dominant male in this case). Observation and research both suggest that altered dogs get lazy and gain weight. It should be realized, though, that much of this has to do with the owners. Exercise the dog more and/or feed less, if needed, to compensate.
The standard answer is still to spay/neuter your pet. Studies still suggest that the benefits generally outweigh the risks. And pet overpopulation is an issue that should not be overlooked or ignored. Follow the recommendations of our veterinarian. Hopefully you have found a vet that is informed, honest, and who has you and your dog’s best interest in mind. Again, the safest advice at this time is, as a general rule, spaying/neutering should typically be done by six-to-12 months of age and that non-breeding, non-protection-trained animals should be altered.