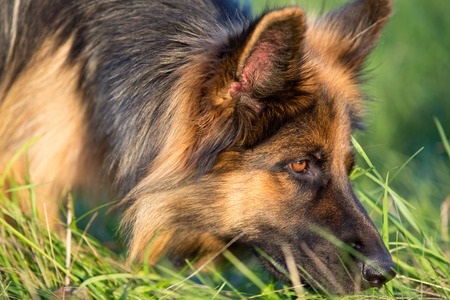 Specific breeds of dogs are often trained to be “working dogs” because they have an exceptional sense of smell that assists them in the field.

Here’s a look at some of the dog breeds that are considered best in class when it comes to their noses.

German shorthaired pointers have long, deep muzzles with big nostrils that are great for seeking out specific scents. Some of them run with their noses to the ground while others run with their heads high in the air. All of them are known for their powerful sense of smell which makes them notoriously great hunters.  You’ll want to be sure to get your GSP from a reputable breeder with stable pedigree or your GSP could be high-strung and “hyper.”

It is no secret that German shepherds have an incredible sense of smell with 225 million scent receptors packed into their noses. German shepherds can either air scent or ground scent. They have extremely impressive scent capabilities which is why they are often hired for police related work.  However, if you want a GSD which will be able to do reliable nose-work, you’ll want to be sure to purchase one from a pedigree of dogs who have a history of dependable scenting, such as working line dogs.

Labrador retrievers are often recognized for having a great sense of smell as well. They are typically good at hunting, and of course, retrieving because of it. They are often used as rescue dogs because they have such a strong sense of smell. Many Labradors are extremely capable of detecting a human’s scent even in severe weather conditions.  Some of the scenting capabilities have been bred out of the Lab, so be sure to choose one with a hunting pedigree – which still retain much of their ability to do reliable scent work.

As their name suggests, Bloodhounds are also popular for their noses and are great at seeking out scents. When they’re hunting, they rely on their tremendous olfactory system to track their prey. They were originally breed to help hunters find boar and deer but are often times used to find lost people in wooded areas.  For some, the Bloodhound is a little more difficult to handle – because all he can think about is working a track 🙂

If you have a beagle at home, good luck hiding their treats!  Beagles are actually a hound breed, and were originally bred in their small form for hunting rabbits. They’re sometimes used as detection dogs, and you might see them in airports sniffing bags for contraband such as prohibited agricultural products, contraband food, or, occasionally, drugs.

Dog Trainer College at Conifer Canine is your source for professional dog training!  We employ certified trainers who have proven their skills in training a variety of dogs.  We welcome all dogs:  large or small, mixed or purebreds, problem dogs or those who just need some tuning up.