Myth:  A 6 week old puppy who is showing signs of shyness will outgrow that shyness as he gets older.

Contrary to popular opinion, it is not normal for a puppy to be shy at 6-8 weeks of age.  It is something that – as a general rule – they will not outgrow.

So what’s the big deal about shy puppies?  Statistics show that fear biting is the most common form of dog bites.  Confident dogs deal with their stresses in a positive manner before it comes to a bite.  Fearful, shy dogs lash out … and the result is a bite.

While it is true that puppies can pick up shy behavior from their mother, most shyness 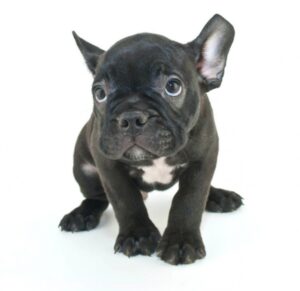 and fearfulness is genetically programmed into the pup.  This genetic programming can make this shyness/fear/nervousness issue quite frustrating.  Fear and shyness runs rampant in many breeding lines of dogs.  Counter-conditioning will help some, but usually does not fully overcome the issue if/when the pup/dog is genetically predisposed to do so.

Hey, look at that!  We just waded into the Nature vs. Nurture controversy.  To simplify the issue, Nature (i.e, poor breeding practices) caused the problem.  The good news is, Nurture can make some improvements.  However, we have to be realistic in just how far Nurture can overcome Nature.

Signs of shyness, stress, and anxiety, include submissive urination/defecation, hiding in a corner, hair on the neck standing up, and whining.  People looking for puppies are often counseled to pick this kind of a puppy.  That’s fine, as long as you are willing to deal with that shyness for the rest of its life.  This kind of puppy is mentally weak (this is not to say the pup is dumb or stupid).

If you’re looking for a confident dog, look for a confident pup.  Puppies who are confident at 6-8 weeks of age will remain so, all things being equal – that is, if they aren’t abused, or have other negative circumstances which condition fear/shyness.  All pups go through a shy stage at around 4 months of age.  However confident pups will deal with their insecurities – with your help – and move on to remain confident, stable members of their pack.

This being said, counter-conditioning will help in some measure.  A growing puppy/dog who is rewarded with treats, petting, and/or praise when he approaches you can usually learn to associate you as something positive and not to be feared.  Pups/dogs who are genetically wired to be fearful will generally make some progress but never fully overcome their shyness.  So the bottom line is….