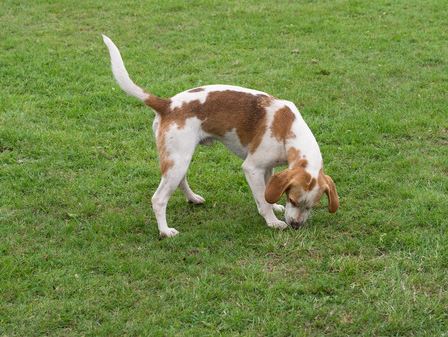 Human beings may have higher intelligence and opposable thumbs, but the dogs have us beat in one category: their sense of smell. Dogs are guided by their sense of smell. Some breeds of dogs have over 220 million olfactory receptors. Humans only have 5 million. We may have invented airplanes and iPads, but dogs are equipped with a heightened sense that helps them to succeed. Even so, there are some dog breeds that have a stronger sense of smell than others. Let’s take a look at some of the dogs that have the most impressive olfactory senses.

Breeds that we know as hunting dogs have a sense of smell that is a major asset to hunters. Dachshunds and basset hounds are two breeds of dogs with outstanding hunting instincts. Both of these dogs are guided by the GPS system that is their nose, as the American Kennel Club notes. Their sense of smell pairs with their keen tracking skill, making them effective scent-tracking dogs for the hobby tracker.  However a larger dog is needed for consistent, effective man-trailing.

Both the pointer and the German shorthaired pointer are related breeds with excellent senses of smell. The pointer is named for its ability to follow its nose and point in the direction of hidden quarry. Known for sniffing out birds, the pointer will obtain a scent and point out where it came from with its raised nose. The German shorthaired pointer sniffs the ground, unlike its cousin, but both breeds put their noses to work to find things that people can’t see – or smell.

German shepherds and Malinois are what we normally think of when it comes to police dogs.  These and similar breeds are actually tied with beagles for the number of scent receptors – approximately 225 million! That’s why it’s no surprise that these breeds are commonly seen with officers as four-legged partners. Their strong senses of smell are used to sniff out narcotics and other illicit substances. German Shepherds and Malinois are commonly seen with police K-9 units, while beagles are often seen working alongside Border Patrol, U.S. Customs and USDA officials.

There is far more involved in successful and reliable scent detection than this little article could possibly articulate (hence our 6-12 week detection courses).  Our comprehensive detection programs teach scent theory, detection fundamentals, and so much more.

Dog Trainer College can teach you how to harness a dog’s natural scent-detection talents. Our courses can teach you how to train a dog to use their olfactory senses to become successful scent detection dogs, cadaver detection dogs or police K-9 partners.   Classes are forming now so now’s the time to apply for admission to our next course sessions. Learn more about admissions online or call us today at 812-650-2394.