One of the major concerns of pet people is house-training their dog/s.  Some dogs naturally make it an easier experience.  Some breeds are more prone to house-training problems than others.  Smaller dogs tend to be harder to house-train (as a general rule) than larger ones.

Puppies who have been raised on puppy pads, newspapers, or have spent most of their first 8 weeks in a house will be much harder to house-train. 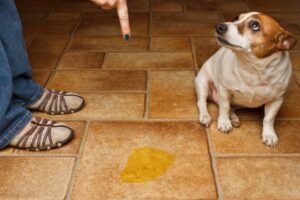 Puppies who have been raised outdoors or their breeders have made purposeful efforts to get them outside for pottying, will be easier to train.  Most of our puppy clients report back to us that the pup has never gone in the house – period.  Breeder influence will go a long way towards house-training success.

Purchasing or even fostering a puppy before it is 7 weeks old will almost always lend to house-training headaches.  It’s called the “five-week syndrome.”  These pups were taken away from their parents too early; before mental maturity began.  Some of these pups may never be fully house-trained.  Always purchase a pup that is at least 8 weeks of age.  There are many solid reasons for this – even in the area of house-training.

Do not expect too much too soon.  Pups aged 4 months or younger cannot control their bladder or bowel movements for long periods of time.  As they mature, and considering you have used effective house-training methods, the length of control should gradually increase.  Consistency on your part will go a long way with your puppy as well.

Do not punish a puppy/dog for messing in the house.  This will only make matters worse.  Too many people rub the dog’s nose in the mess, yell at the dog, or angrily throw her into a crate.  This confuses the pup/dog.  He knows your upset but he doesn’t know why.  He may figure out that it has something to do with messing but “why do humans get so upset about it?”

If you catch the dog “in the act” you can quickly take him outside.  But don’t get upset with him.  Reward him profusely when you see him/her doing their business outside.  Compliments go much farther than punishment.

Fact is, if the pup/dog has an accident in the house – it’s your fault, not his.  Either you weren’t watching him/her closely enough, let the dog have too much room to play and potty, were too inconsistent with letting him out, got sidetracked by the TV program, or etc.  Try rubbing your own nose in his mess next time.  You deserve it J

House-training is an investment.  It’s not the most pleasant part of the doggie world but it pays off.  Give the pup/dog time, attention, and consistency, and solid progress can be made.